The phrase secrets of the guild was used by Bertie Wooster to describe the reason that his manservant, Jeeves, could not divulge the ingredients of his morning pick-me-up. This post is intended to give pieces that could be used for discovery learning about basket curves, a modified type of petal curve. Occupy Math has looked at petal curves before, to make flowers. This post highlights a “secret” in the form of a not-completely-obvious pattern that permits students to make complex and interesting pictures.

For the picture above, we are starting at the center of the picture and, at a given angle from horizontal-to-the-right, going out some distance (or radius). This is an alternate way of finding your way around the plane called polar coordinates. Normally we use x-y coordinates where you go a horizontal then a vertical distance to find a point. In polar coordinates, you starts at the origin, (0,0) in x-y coordinates, pick a direction (angle) and a distance. Both coordinate systems let you find any point — but in x-y each point has one name or position; in polar you get a point again each time the angle goes through a full circle. Which system is easier depends on the problem you’re trying to solve. We call the angle-and-distance system polar because the origin is the “pole” of the system.

If we make the radius out from the center of the picture proportional to Cos(5θ) (where θ is the angle) then the graph is the five-petaled curve shown above. We need to let the angle go through a half circle to finish drawing the picture. If you don’t remember what a cosine is, it’s a function that goes up and down in a regular wave. That up-and-down waviness is what makes the petals. 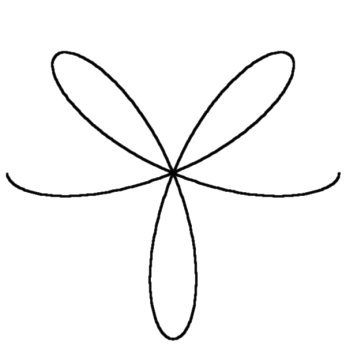 When the number inside the cosine function, like 4 or 5, is a whole number then the rules are as follows.

Actually, if you let the angle go through a full circle when N is odd, it will draw the same picture — but you will trace over every part of the curve twice. These rules are taught in most courses that teaches polar coordinates. Here’s the point where we diverge to something interesting: N does not have to be a whole number!

What happens when we use decimals inside the cosine?

Look at this graph of Cos(1.2θ) when the angle goes through a full circle.

Wow! That was incomplete. It actually looks about one-fifth done, so let’s go through four full circles and then five full circles. Voila!

The first time the whole curve gets drawn is five full circles — and the number 1.2 is one and one-fifth. This isn’t an accident. Occupy Math worked out the following rules for when you have fractions inside the cosine. The number of full circles needed is the smallest whole number you could multiply the decimal number by to get a whole number. 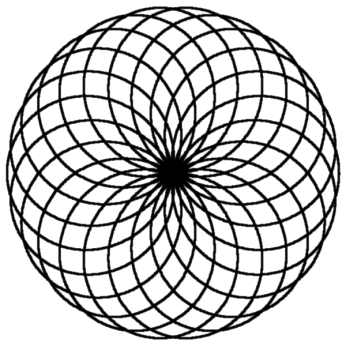 Let’s look at some other decimal values.

The basket curve Cos(1.5θ) with two full circles looks like this.

Notice that as the fractional part of the curve gets smaller the “petals” get wider. The 0.5 in the curve above is the largest fraction we’ve used and the petals are the narrowest — except for the much narrower ones from the whole-number petal curves. How about Cos(1.25θ)? There are ten petals and they are a little thicker than for Cos(1.5θ). 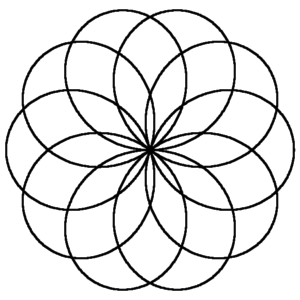 So far every fraction Occupy Math has used has been between 1 and 2. What happens if we use N=3.1 with ten full circles? Compare this with the N=1.1 curve above.

To see what’s going on, let’s run this basket curve, Cos(3.1θ), for only two full circles.

This curve looks like a shifting version of the N=3 petal curve (and it is). The fraction simply moves the main curve around the circle. Another thing is this: the way odd curves need only half a circle is destroyed by adding decimals. Since the curve is rotating, the fact that it is drawn twice by letting θ go through a full circle is happening — but the fraction means the two copies are not on top of one another like they were before.

Why does Occupy Math know this?

Whenever Occupy Math sees a cool picture that arises from math, he tries to break it. Another example of this sort of behavior is in the post on the fractal face. Occupy Math was taught the rules for when N is a whole number in high school; he asked the teacher what happened when N wasn’t a whole number and the teacher said “why don’t you go figure that out.” In retrospect, Occupy Math thinks this was sarcasm (the teacher seemed startled and put out with the answer Occupy Math constructed, not pleased) and it was a lot of work to figure all this out the first time. Anyhow, a lot of pictures get more interesting when you mess with the formulas that define them.

The first step is to find software that can graph polar curves and lets the student specify the domain of the curve. Occupy Math is using his own hacked c++ code in a UNIX command line interface. You are welcome to that code from dashlock@uoguelph.ca and Occupy Math will try and get better code soon — but there is always a problem with code running on your system. There are many packages that can “graph polar curves”. Find one that runs on your system.

The “odd needs a half circle, even needs a full circle” pattern is one that students can discover quickly. Start them on fractional numbers — 1.5 is a good one to start with — and ask them to find the smallest number of times around the circle that draws the whole curve. There are several ways to phrase the correct answer, and also there are several things that sort of work. Be alert!

There are many other discovery activities that can be built around basket curves. Occupy Math has not even touched on coloring basket curves, for example.

Another possible activity: ViHart has a wonderful video on drawing snakes that can be applied to basket curves.

This post is intended for teachers. If you are a teacher and would like a more complete article formatted as a PDF, write Occupy Math and he will make it as fast as he can. If you do this activity, please let Occupy Math know what patterns your students found. If you base another activity on basket curves, Occupy Math would love to hear about it. Want other exercises? Have suggestions? Please comment or tweet!

I hope to see you here again,
Daniel Ashlock,
University of Guelph,
Department of Mathematics and Statistics

One thought on “Secrets of the Guild: How Occupy Math found one.”